Having recently concluded the sale of a hotel in Saas Fee, our MD Simon Malster explains the process and gives some tips which will help you if you are looking to buy or sell a hotel.

We sold a hotel in Saas Fee recently and it was probably the longest and most complicated sale of the year. I thought it would help hotel owners looking to sell and clients looking to buy if I drew from that experience and highlighted some of the points which arose out of that transaction.

As is often the case, the owner had run the hotel for years and now she and her husband wanted to retire. Her daughter is in her 20’s so did not want to take over the business. Our brief was to sell to an individual who would take her place and continue to work in the business or to a hotel company which would appoint a manager.

They had “sold” the hotel two years before but the sale had fallen through. This time around they were more focused and agreed to allow us to list details of the hotel on our web site. This highlights a common problem – often the owner does not want to alert staff or guests that the hotel is for sale. If we can’t show it on our web site that restricts our ability to sell it. I always tell clients that it is best to “put your goods in the shop window”. If you are serious about selling, then sign a proper sales mandate and allow the agent to advertise.

As the lot size was larger than most individuals could afford (over 10m sfrs) it was always more likely to appeal to a hotel company. I was contacted by a hotelier who already had a hotel in another resort in Switzerland. I had stayed at that hotel many years before and I knew that the hotel in Saas Fee would be a good fit for them.

However, an advisor had drawn up a list of more than ten hotels which they were considering. Before they visited any of them they wanted to see “the numbers”. As the hotel was being sold as a continuing business the accounts were very important and the buyer wanted to see not just the annual accounts but also the management accounts showing the complete breakdown of income (restaurant, bar and hotel) and all the expenses. We always advise hoteliers to have all this information ready and up to date as it always the first information the buyer will ask for.

In some cases the accounts are not particularly important. We have another hotel for sale in Saas Fee which has been closed for two winters because of COVID. As the hotel needs updating anyway the accounts from 2 or 3 years ago don’t really help much. In that case market information will be important and often the tourist office can help to give the buyer an idea of the tourist market and potential. Some hotels are sold to for redevelopment as apartments so it will be more important to have architect plans and a valid building permit.

After we answered some questions about the accounts the advisor made a first visit. After that visit the hotel made it on to their short list so then the hotelier himself came to take a look. Then the negotiations started.

When I sell a chalet the negotiations can take a few days but there are not many variables, just the price, furniture and a completion / hand over date. With a hotel there are a lot more variables. The first is the structure of the sale. Will the owner just sell the asset? Or if the hotel is owned by a company) will the shareholders just sell the shares? There are tax advantages for the owner to sell the shares and often too for the buyer (particularly if they have other hotels in a holding company). But it is also more complicated as the buyer has to carry out due diligence on both the property and the company which owns it. Accountants and lawyers will need to be sure that the company has a clean bill of health and has no hidden liabilities. It all takes time and costs money.

Then there is the handover date. It is always better to have the handover at the end of the ski season than at Christmas! So depending on when the deal is struck there could be a delay in completing the transaction.

That was the case here. The price and a rough heads of terms of the sale were almost finalised in December but it made no sense for either party to conclude the transfer until the end of the ski season. Covid made that a bigger problem than usual. It was impossible to predict how the hotel would perform in those remaining months. They had already taken a covid loan from the government and had claimed on their insurance but would they have to make further claims and borrow more before the sale? This could have a huge effect on the balance sheet and as the buyers are buying the balance sheet as well as the asset a formula had to be devised to factor that in to the final price they paid. That’s complicated but a formula was agreed and I think it is the first time I sold a property without knowing the price!

If the season went well the price would go up but if it bombed so would the price. The vendor had to take on some risk – could they keep open and profitable when the pandemic was raging in Europe and governments were discussing shutting down resorts. As it turned out Switzerland was the only country to keep their ski resorts open for overnight visitors. International travel bans came in to effect in late December and it looked like the hotel industry would take a hit. Luckily the Swiss left the cities to enjoy the mountains, the snow was good and the hotels were full.

As the season progressed so did the transaction. Although a definitive sale had still not been agreed, the buyer started the due diligence on the property. They sent  a “ Documents request list” set out in an excel spread sheet requesting over 60 documents. This included everything from soil and building contamination reports (e.g. Asbestos), energy reports, to the accident book.

The owner told me it would take him weeks and he was really busy as this was now February and the hotel was fully booked. It took another couple of months to deal with all the documents and then the heads of terms and then the sales agreement was signed.

That was in April but the season had still not finished so the owners had to keep running the hotel and then wait a further month to close the books and receive the payment. In that period the new owner had to conclude taking over the business loan from the bank that the vendors used. They had an agreement in principle with the bank but it had to be signed off by the credit committee. At the end of May the transaction was finally concluded and we were paid the sales commission!

We have a lot of enquires about hotels from buyers who see themselves as hoteliers and some consider buying a chalet to run as a bed and breakfast accommodation. Here is some general advice they may find helpful.

If you are buying a hotel as an investment and you are not intending to run it yourself then all the usual rules which apply to buying a business will apply. You will obviously need to study the accounts, the market and occupancy rates for the resort as well as the property itself and its potential.

A hotel is exempt from the usual Swiss property rules so you can buy it as an investment provided it is run and managed by a person having the required qualifications. However, you are not permitted to buy a residential property unless it is authorised for sale to a foreigner. The usual rules will also restrict how long you can stay there and if you are running it as a business you will need to register it as such. So it is complicated in Switzerland to buy a chalet and run it as a B&B – much easier to just rent it week by week to tourists. If you are an EU citizen you will have more flexibility to buy and run a B&B in France or Austria.

I was asked to sell the hotel in Saas Fee as I have been selling property there for over 20 years and know it well. We have three more hotels in the resort for sale. One is on our web site...

The Carpe Diem would make a great boutique hotel for a new owner who would invest a little in it. It has been closed for over 18 months because of Covid. It is in the centre of the resort but in a quiet position off the main street. Previous owners have updated some elements of it and a local architect was asked to draw up plans for an extension. It has good potential. I sold it to the current owner so I know the history.

Saas Fee is a resort where a boutique type hotel would do well (as proved by the Belmont which was recently refurbished).

There has been a shakeup of hotels in Saas Fee in recent years with a lot of investment in the top hotels Capra, Walliserhof and the Schweizerhof. Several of the 3* hotels have been converted in to apartments and sold off (Derby, Britannia, Berghof, Astoria, Imseng, Metropole and Walser). I know of two or three more hotels which will go the same way this year. So now there is less competition for the hotels which remain!

So I would recommend the Carpe Diem if you are looking to create a niche market hotel. The other two hotels are both currently operating successfully as hotels. One is priced around 3.5m and the other closer to 10m sfrs.

If you would like more information please contact us and ask to speak with myself - Simon Malster - I will be happy to discuss.

Back to Articles
Related Articles

The Alpine real estate landscape is, in many ways, like...

We have a lot of demand for chalets up to...

For those of you seeking an Alpine property as a...

I am often asked by clients if I own a...

2020 was a surprising success for Swiss property sales, as...

7 top tips for buying a property in the Alps

With over 50 years of combined Alpine property sales experience...

Why buy through Investors in Property?

As we begin to prepare for the winter's ski season,...

Buying a property in Switzerland – What you need to know

The spiritual home of winter sports and the heart of... 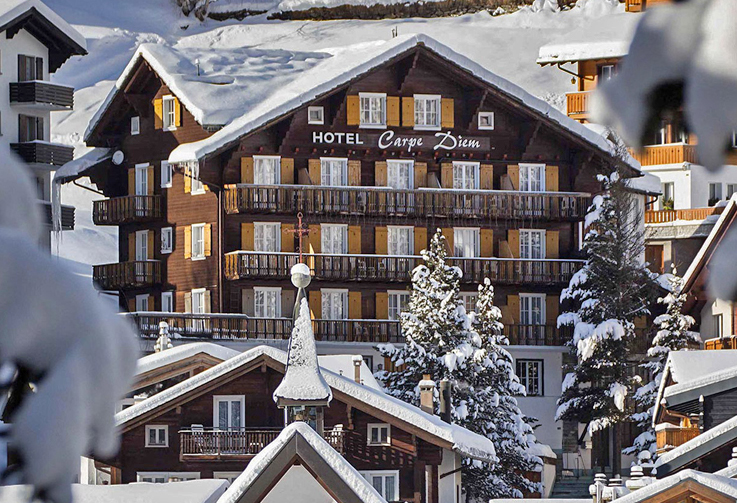